In Canada, with a population of just over 35 million, I’ve read Canadians complain about poor governance, stretched services, and service delays. With that in mind, I can barely imagine how governance and services must be in California, a US state with a population of almost 40 million and an area almost 24-times smaller than Canada. While I’ve never lived in California, people who do have repeatedly gone to lengths to divide their state up.

Read the Wikipedia article on “Cal 3“

In the same improbable year that Zimbabwe President Robert Mugabe—long considered in the West as a dictator who has led his country to economic ruin—was elected the World Health Organization’s goodwill ambassador, he has been overthrown by his own military.

The Zimbabwe people are now at a crossroads. Don’t waste this…

Bustle writer De Elizabeth made a critical point about psychological projection in her article, “Do We Hate On Taylor Swift Because We Actually Hate Ourselves?” De Elizabeth argued that, despite some valid and but overall negligible criticism of Taylor Swift’s activities and her career trajectory, if many of those critics were just honest with him or herself they would see that their criticism of Mrs. Swift was just borne out of personal resentment and self-doubt.

Could Taylor do better? Sure. But, more importantly, we all could do better, and if we put as much effort into our own activism as we do into insulting Taylor for what we perceive to be self-serving behavior, we’d probably see more progress than one celebrity can do with a single tweet.

Taylor Swift, the artist, may never evolve beyond her trope, De Elizabeth wrote, and she may never be the cultural or gender “savior” that some critics have claimed she would be. Regardless, Mrs. Swift had the talent, ambition, and willpower to become hugely successful, and that’s much more than many people would even dare aspire to be. That Mrs. Swift also demonstrated her personal virtues when she defended herself in court against a man who violated her further set her apart from the keyboard warrior crowd that derides her as a fake or even worse.

The fine for crossing the red line in Syria.

And just hours after Trump ended his dinner with China leader Xi Jinping.

As someone who hated Mamoru Oshii’s 1995 film, enjoyed his sequel, Innocence, adored Masamune Shirow’s original manga and the Stand Alone Complex TV series—that was far more accurate to the original manga than Oshii’s films, and all of the spin-offs, I don’t agree with and I dismiss criticism concerning the casting of Scarlett Johansson in the role of Motoko Kusanagi as whitewashing.

Ghost in the Shell is set in an alternate near-future where technology has advanced to such a degree that cyberization and body swapping are commonplace, when the consciousness of thousands of humans can be stored on the Internet, and where the line between artificial intelligence and the human soul is so blurred many individuals question the essence of life and whether they are truly alive or are just software.

The character of Motoko Kusanagi, a thirtysomething plus ex-Japanese special forces operative, has had a succession of industrially manufactured prosthetic bodies, albeit military grade, few or none of which were particularly East Asian-looking—that I have seen in any officially-licenced material, since a plane crash killed her parents and essentially destroyed her natural child body.

While it is possible, in the GitS universe, for someone to have an original, one-of-a-kind prosthetic body, that could imitate or extrapolate one’s original body, it’s far, far cheaper, far more convenient in terms of repair and anonymity for a government security agent to have either an off-the-shelf or commercially popular “appearance package” for one’s cyber body.

According to Wikipedia (in reference to the Dark Horse manga), Shirow gave Motoko a common cyber body for an additional reason: so she wouldn’t be harvested for rare parts. That makes sense. Real super spies don’t go driving across Europe in rare Aston Martins to attract attention from everybody.

If we were to think about the commercial aspects of what would be a popular cyber body, we have only to extrapolate from fashion ads and movies to imagine who people wish they could be: Scarlett Johansson, Beyonce, Cristiano Ronaldo, Idris Elba, Marilyn Monroe, Napoleon, etc. In the future of GitS, anybody with money can be Beyonce or Scarlett Johansson. Indeed, an episode of the Stand Alone Complex featured a woman who swapped her body for her ex-lover, Paz, a man on Kusanagi’s security team.

In a world where “Scarlett Johansson” cyber bodies could be as ubiquitous as Herschel backpacks or Toyotas, why shouldn’t a secret government agent like Motoko Kusanagi be played by Scarlett Johansson? 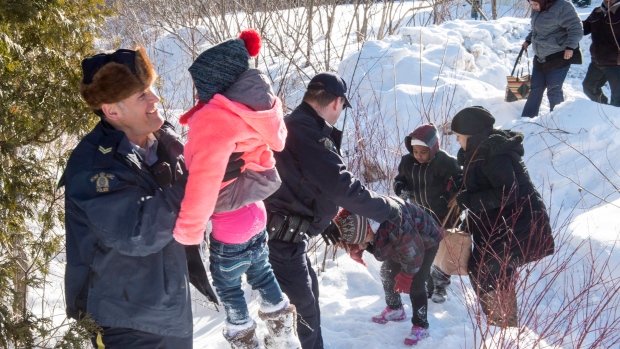 The RCMP near Hemmingford, Que., aided Sudanese and Yemeni twice-refugees after they crossed the Canada-US border in fear of the Trump administration. The refugees were arrested by the RCMP, as a matter of law, but they are now allowed to stay in Canada to process their refugee claims (Paul Chiasson/The Canadian Press via CTV News).

No personal scandals. No obvious failures of his own. Fearless optimism in the face of constant racism and Republican obstructionism.